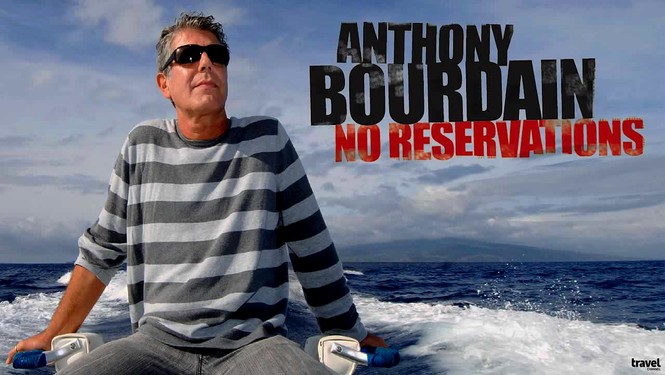 Anthony Bourdain has been an inspiration for me in so many ways. Because of him, I dared myself to go beyond my comfort zone and try new adventures without any reservations.

I first met him as a bored wife in 2010. Having lost a baby, I had nothing left to do but pursue my passion as a home cook. Youtube was my favorite hangout, where I binge-watched A Cook’s Tour in the middle of the night.

His sarcasm and I-don’t-give-a-flying-fuck attitude drew me in, and I couldn’t help but fall in love with the guy. He was still a scrawny, lanky man then, and I watched as he tried out different specialties from all corners of the world. It was also a time when people all over the world were beginning to get bored with their 9 to 5 cubicle work.

The internet was fairly new. Facebook was just beginning to take over the world, and I was starting to think of writing blogs.

As a mother nursing an empty cradle and a broken heart, food became my refuge. And Anthony Bourdain became my tour guide and my compass to which direction to go to. I started building new dreams and goals, among those was to travel the world and try new things.

I began cooking, looking for new food to try. Little by little, my husband and I washed away the pain in our hearts with different flavors of delicious food. We started trying new restaurants and traveling within the metro to search for our new favorite places to eat.

The more I watched him, the more I wanted to live life and take on new challenges. I became motivated to work so I could eat my fill. I experimented with recipes and continued to dream about hopping on a plane and tasting the flavors the world had to offer.

Here’s a few of my favorite episodes from his shows.

And this special lesson from the experts themselves:

Fast forward to today, I am now a professional food writer. And most of the knowledge I have about food and culture came from watching episodes of No Reservations, Parts Unknown, Ugly Delicious, A Cook’s Tour, and The Mind of a Chef. My culinary skills have also greatly improved, and I’m now on the verge of launching my food business.

Every step of the way, I’ve continued to watch Anthony Bourdain talk about food, politics, and culture. And like him, I realize how little I know and how far I still need to go.

For me, Anthony was the epitome of what the man of the world is like. And through his lens, I got to experience countries I’ve never been to and got to know people and cultures I’ve never heard of.

He had such a huge impact in the world of food that anyone who gets featured in his show automatically gets a claim to fame. He also paved the way for chefs, foodies, bloggers, and vloggers to explore and share their experiences all over the world. Honestly, I couldn’t imagine Mark Weins, Mike Chen, and the others without thinking first about Anthony Bourdain’s no fuss, no bullshit show format.

Anthony also battled his own demons. He freely talked about his drug addiction and financial woes in the past. And he also talked about how grateful he was to experience how it is to have his life turn around in the best way possible. At the surface, he lives a life of adventure and hedonism. So it’s so hard to imagine why he would want to end his life the way he did.

But that’s the reality of depression. It kills. And it chooses no one. No amount of money, popularity, or achievement can save you from the bouts of depression.

It is difficult to understand, and the symptoms may vary. But it’s all the more reason for us to reach out to people and be more compassionate to each other. The world can be a bitter place and no one really comes out of it unscathed. We all have limited times, so why not spend it sharing each other’s burdens and lending an understanding ear as much as we can?

Up to this moment, my mind is still trying to comprehend the loss. It may not be a big deal for some, but to me, Anthony Bourdain has become a mentor and a friend. He was even my companion during lonely mealtimes and the cure to my wanderlust.

He will be sorely missed.

To you, Anthony Bourdain, my hero and my inspiration, may you rest in eternal peace. And may God have mercy on your soul.

Or call the Hopeline: