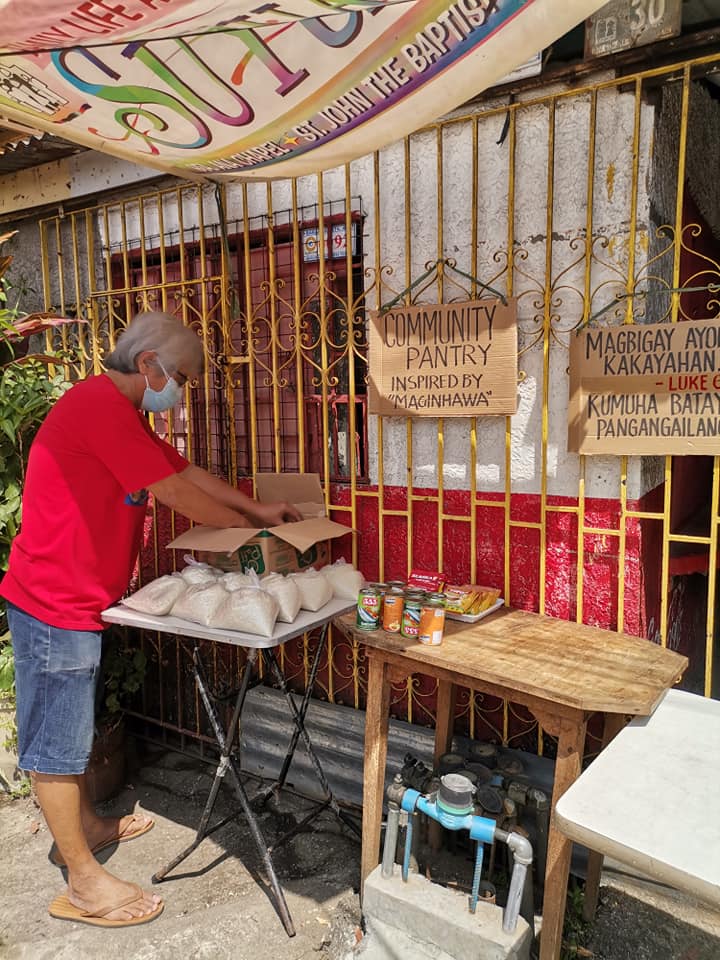 The story of Jesus feeding 5000 people was one of the bible stories I grew up with.

I was amazed at how Jesus divided five pieces of bread and two fish and made it enough to feed a huge crowd. Plus a few more to spare.

Honestly I never really thought about it. As a Catholic, I never really questioned how it was done. My faith taught me that with God, nothing was impossible.

My life has been full of miracles. And in our darkest times, we’ve always depended on Divine Providence.

We believed that as long as you did what you could, the Lord will provide you with all of your needs.

Now it’s been a year since the lockdowns started. And honestly, I feel like we haven’t had any progress. So many have lost their jobs, and continue to lose what they have.

We as a family have tried to do our best in contributing to other people’s needs. We’ve done our best to give as much as we could so others could also have a share of our blessings.

We’ve been so grateful that we’re healthy, and safe. We have food on the table, the bills are being paid, and we’re also able to help other people provide for their families.

Two weeks ago, Ana Patricia Non pioneered the community pantry in Maginhawa, QC. Here, people can donate and get freely according to their needs.

It has gotten the country’s attention and has sparked a sense of bayanihan among communities.

It was a genius idea. And different communities all across the country started following suit.

My father approached us last Sunday and told us about his intention to start a community pantry on his birthday. He was also coordinating with a few people in the community who pledged their donations.

I also posted an announcement on Facebook to encourage those who would like to participate. So on Monday, we were able to get it started.

We started out with some basic stuff: rice, coffee, milk for the kids, canned goods. There were also packed soup kits, noodles, and donated vegetables from local farms.

Eventually, we progressed to give out vegetables so we could have a healthier option for those lining up. Doing so hits two birds with one stone. It gives people a chance to eat fresh and also helps local farmers with selling their produce.

Days passed by and we’ve got long lines. And we try our best to maintain the distance and practice MECQ protocols as people line up.

In six days, we’ve helped an estimate of almost 300 families put food on their tables. And that’s only us.

What’s overwhelming is the goodness of the people around us.

Every time vendors learned that we were buying for supplies for our pantries, they would throw in a little extra.

The rice folks gave us two extra trays of eggs. The vegetable vendors gave us the base rates for the produce. They even gave us extra vegetables for us to give away.

Neighbors started helping us carry the stocks to our house. Some donated instant noodles, some canned goods, and disinfectants.

People I didn’t know started contacting us to ask for our location so they could drop off their contributions.

Friends, families, and colleagues send money through Gcash so we could continue buying goods for sharing.

Farmers are giving away their harvest to help pantries fill up.

Volunteers step up and share their time in helping pack the goods.

And those who were lining up also get only what they need, thinking of the next ones behind them.

Like everything else, starting this movement also has its unique challenges.

Some locations are being red tagged. Some are even being branded as “leftist” because the concept of “equal giving and sharing” is a “communist practice”.

On a smaller scale, there were a few individuals who would take more than what they need.

Some even bring families to the line. There were also incidents where a family came in and loaded everything on the table to their tricycles.

And then there’s the infamous “egg ladies” in Kapitolyo.

Despite these, I want to think that we’re moving with a higher purpose.

There are more stories of kindness and generosity than those who exploit the goodness of people.

And because of this, we will continue to choose to serve those who need it the most.

So many people are going hungry and losing hope. And we’re hoping that doing this small act of generosity can bring hope back.

We’ve all been burned at some point. Someone has broken our hearts and our trust. Some exploited our kindness.

And it’s normal for us to be dubious of other people’s intentions.

Maybe that’s why it’s difficult for us to trust the goodness in people.

I know I feel that way at times. But with all the things I’ve been seeing and experiencing these past week, I still believe in the goodness of people.

Maybe Jesus feeding the 5000 wasn’t such a miracle at all.

Maybe the small act of a kid who shared what he had moved the hearts of others to also give what they had.

And maybe, that’s just what we need at the moment.

A little encouragement. Someone setting an example. Someone standing up and taking action.

Maybe that’s the lesson God wanted to teach us with Jesus feeding 5000.

The true miracle is the seed of goodness that He put inside us. And if anything, the community pantry movement has proven that the smallest kindness can create a huge wave of change.

Be a part of the movement today. Get in touch with me here.